Never Alone on the Animal Farm: Teaching Video Games in an ELA Classroom 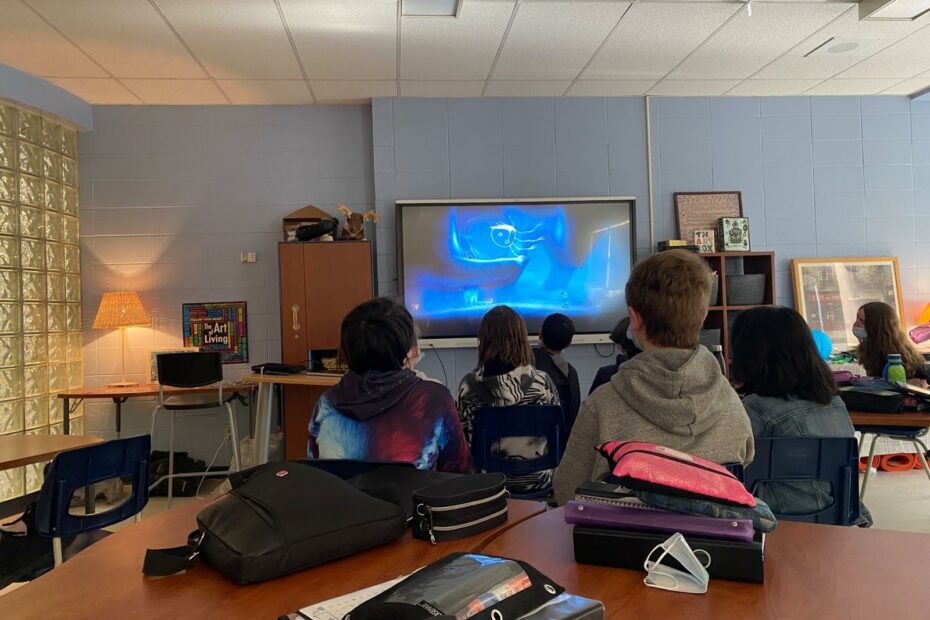 Hello! We are two English Language Arts teachers interested in using video games and other digital narratives to motivate and inspire our students. We have collaborated together on research in this area since we started the Masters of Teaching and Learning program at McGill University. We are excited to share our recent individual experiences and learnings in using video games as classroom texts, in the hopes that more teachers take an interest in the learning possibilities afforded by games.

In my Grade 7 English classes, we are exploring Indigenous culture, identity and storytelling. To begin our Indigenous unit we read the graphic novel Sugar Falls and the novel Fatty Legs. Both of the stories are focused on residential schools and the first-hand experiences of survivors. After finalizing our discussion on residential schools, we transitioned into looking at traditional Indigenous storytelling and culture by playing the 2014 video game Never Alone.

Before starting the game, we looked at the history of the Inupiat people, discussed the importance of oral storytelling, and developed an understanding of how much of the storyline is driven by audio recordings of elders from the 1980s. The first challenge of introducing a video game into the classroom is framing it as a text to be read and analyzed, just like a novel. The guiding question for my class whilst playing Never Alone was: How does Indigenous storytelling act as a form of living resistance?

Never Alone is split into ten chapters. After each chapter, I assigned the class a journal writing exercise that allowed students to articulate their experiences. Teaching Never Alone was a success. By the game’s conclusion, our play sessions had grown into a participatory learning activity that expanded the class’s understanding of how Indigenous storytelling can act as a form of resistance.

Never Alone is a video game that was written and designed by the Inupiat community. The game’s protagonist is a young Inupiaq girl named Nuna, whose Arctic Fox assists her in finding the source of a destructive blizzard. The game’s storyline is supported by short videos called cultural insights. There are 24 unlockable cultural insights within Never Alone that help connect Inupiat culture and people to the game’s world. I found it helpful to show the students the cultural insights on YouTube before playing the part that they are unlocked in. Watching the videos in advance ensured students would have more of an awareness of the topic at hand. The storyline of Never Alone is composed of numerous puzzles that require the players to work together and control both Nuna and the Arctic Fox simultaneously. Students were very receptive to the collaborative nature of the puzzles and were placed in pairs. I would set a timer and alternate players every five minutes so that each student had an opportunity to play. My English classes total 28 students each, so it was important for fairness and attention spans to keep alternating the players.

A large obstacle was encouraging students to play who were previously unfamiliar with video games. Students often ridiculed each others’ ability to navigate the game world, so I found myself reminding them often to offer their classmates positive assistance instead of criticism. The method that I found most effective was pairing students who had no video game experience with students who had played in the past, which encouraged them to collaborate and teach one another in order to succeed. I found that the more frequently the class’s novice gamers played, the more eagerly involved the rest of the class grew in the game’s outcome. If these mentor-mentee pairs proved effective at getting through puzzles, the class would cheer them on or request that they play whenever a level got too difficult.

novel Animal Farm. The video game Animal Farm is roughly three hours long and was released in 2020 by a small studio. The game features a narrative which contains many themes similar to the original book. The player assumes the role of an omniscient leader who directs the animals in their misguided search for utopia, and the gameplay allows players to change plot events from the original novel, which can lead to alternative timelines. All of these timelines result in dystopic endings, a factor which proved significant to the class’ reading.

I introduced this game to one of my tenth grade English Language Arts classes following a classroom reading of the original novel Animal Farm. Demographically speaking, my class was a group of thirteen students composed of twelve males and one female. Many of these students were coded with learning difficulties; none had strong reading skills, and the Animal Farm game doubled as a form of remedial comprehension for those who had gotten lost during our reading of the novel.

I intended to use the Animal Farm video game as a companion text and part of a culminating project that would immerse players into the mindset of people living in a dictatorship. We preceded the game by exploring the concepts of propaganda through class discussions, documentaries and reflective writing about the influence of media such as national anthems.

My observations of the playthrough reinforced certain guidelines that I have come to regard as essential for integrating games into a classroom. Early on, I noticed that once the initial excitement of playing a game in class wore off, several of my students started to sink into a stupor. Because the game is text-based and features dialogue from many characters, I assigned voice acting roles to every student. This kept the class attentive…mostly. As it is not always fun to watch other people play a video game, and schools typically lack the resources for every student to play, teachers should give roles to students who are not actively participating to keep them engaged. These pragmatic considerations can make or break the class’s experience, and I was lucky that I had a small enough classroom for everyone to have a speaking part. I also believe that encouraging the class to invest emotionally through various planned activities improved their participation, which reinforced my hypothesis that games need purposeful integration and a raison d’etre for being in the classroom, as the novelty factor alone will not suffice to keep students’ attention.

Another observation that I gathered from the playthrough was that teachers need to understand how a game’s available choices (or lack thereof) can impact a game’s textual reading. Doing so will provide teachers with the kind of reflective questions that elevate their students’ thinking about the game, even if the playthrough unfolds in an unexpected way. During our playthrough of Animal Farm, one student (“Student J”) made a number of decisions on his own, particularly at the beginning, but switched to a more collaborative leadership style and consulted with his classmates on what to do during key junctures. Student J’s relatively benevolent approach stood in contrast to what I had expected from another student (“Student C”), whose self-centeredness, in hindsight, would have provided the perfect counterpart to Animal Farm’s dictatorial Napoleon. However, the game’s difficulty made positive outcomes scarce. Despite the class and Student J’s best efforts, they encountered many setbacks such as starvation, attacks on their farm by humans, and attrition of labour as animals abandoned the farm. Before long, the class turned on Student J and castigated him for the very decisions that they had encouraged him to make.

The game’s thematic design encouraged me to alter the reflective writing assignment that I closed the unit with, as Student J’s playthrough changed the tone of the class’s Animal Farm story away from that of a selfish tyrant exploiting the abused masses to that of a leader doing their best to keep a sinking ship afloat. As a result, our final class discussion shifted away from the corruptive dangers of unchecked power, and instead focused on the limitations of outsourcing collective moral responsibility to well-intentioned individual leaders. Overall, this format proved to be engaging, and my students reported afterwards that they felt a new appreciation for the novel and its highlighted themes.