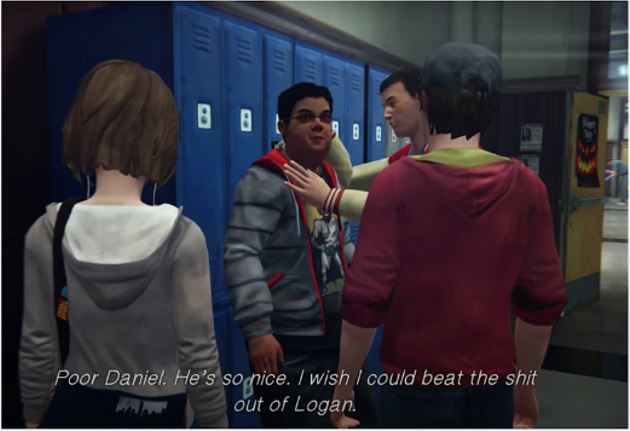 While the idea of navigating video games with my secondary students has long been an enchanting one, the how of it all left me baffled. As an ELA educator with a background in English Literature, I was well-equipped with the tools required to analyze more traditional textual formats in the classroom – a young-adult novel, Shakespearean play, piece of poetry, etc. – but my confidence waned when it came to digitized new media texts like video games. While I certainly wouldn’t venture to call myself an experienced gamer, I knew enough to understand that effectively integrating video games into my secondary ELA curriculum would require more than a simple understanding of plot structures and literary terminology: How would I account for the participatory nature of game-based storytelling? What about the playable and multimodal components – like sound, visuals, text, and controller vibrations – found in games?

I was able to begin exploring these questions when I joined forces with a team of six educator-researchers across Canada and Australia in 2020. All teaching and researching in varied contexts from youth centers to public/private high schools and university classrooms, we were keen to 1. popularize the idea that video games could indeed be utilized as educational texts within language-learning environments, and 2. develop a meaningful playthrough methodology apt for playthroughs with adolescents.

Once we had named our research endeavor – “gamesRlit” to signify the merging of gameplay and literacy – we began to discuss the genres we wanted to focus our attention on. From role-playing to puzzle and shooter titles, we quickly realized the potential catalog was vast. Keeping the ELA contexts we were familiar with in mind, we chose to explore narrative-based games that feature robust storylines and complex characterizations while requiring a constellation of multimodal literacies. Our preexisting affinity for young-adult (YA) print-based texts further narrowed our focus on games featuring adolescent protagonists navigating themes common to the YA genre (e.g., friendship, identity, family dynamics). With these overarching game characteristics decided upon, we put a preliminary catalog of YA narrative-based games together, organized according to: game title, protagonist age (ranges of 10-20 and 20-24 included), genre, and available devices. A sample of this catalog has been provided below:

While certainly not exhaustive in nature, the catalog provided a great jumping off point for the research team as we began to select games for individual playthroughs. In terms of developing our methodology, we drew from game studies (e.g., Hocking, 2007; Caracciolo, 2015) to better understand the two overarching components driving video game storytelling – narrative (gameworld qualities like plot, characters, and settings) and ludology (gameplay qualities like rules, player abilities, and strategization). We also felt it was important to include a critical aspect to our methodological framework that would encourage youth to analyze representations of adolescents/ce during gameplay. We drew from existing critical textual analytic frameworks applied to more traditional formats for inspiration (e.g. Petrone, Sarigianides & Lewis, 2015).

Through a merging of these two fields, we developed a critical playthrough methodology designed for navigation of YA narrative-based video games. The methodology’s key terms, guiding questions, and an analysis example of the YA video game Life is Strange can be navigated below:

A more detailed dive into this methodological framework can be found in this recently published article: Ehret, C., Mannard, E., Curwood, J. S. (2022). How young adult videogames materialize senses of self through ludonarrative affects: understanding identity and embodiment through sociomaterial analysis. Learning, Media, and Technology, 1(1), 1-14. DOI: 10.1080/17439884.2022.2066125.

The research team also plans to release an ELA-focused website featuring gameplay walkthroughs in Fall 2022. A preview of this site is currently available here: https://understorylabs.wixsite.com/gamesrlit. Feel free to reach out to the project’s primary investigators with any questions or comments through the contact information listed below: